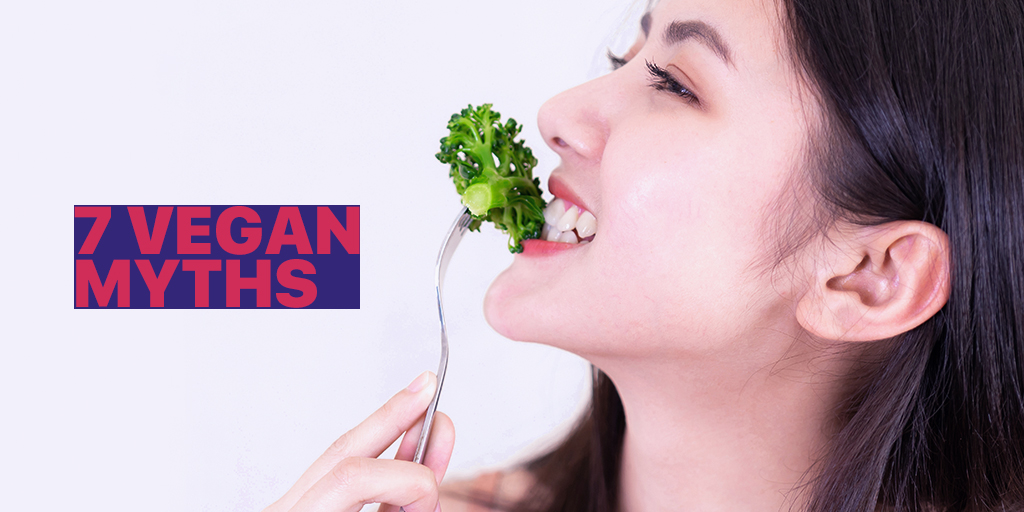 Several people have turned vegan owing to rising environmental and ethical concerns over meat. This has led to a lot of rumors about vegans and the vegan diet. The meat industry in particular is one of the largest contributors to the greenhouse effect. Veganism isn't merely a healthier alternative, but it also cuts down our carbon footprint. While most myths can be busted with simple logic, some of them require a more scientific breakdown.

Today we bust vegan myths that are not only believed by non-vegans, but also by some vegans themselves.

This is a popular vegan myth and rumor believed by non-vegans. On the contrary, vegans tend to be far healthier than their non-vegan counterparts. Vegans get access to a variety of macro and micro-nutrients from their fruit and vegetable diet. The plant-based diet also excludes bad components like cholesterol and saturated fats. These are far too common in diets that incorporate meat products. Vegans are also bound to be less prone to obesity and at a relatively lower risk of cancer. By eating most of the recommended portions of veggies and fruit, vegans get rich doses of antioxidants. They help in leading a far healthier life and even prevent signs of premature aging. 2. Veganism and Vegetarianism are The Same

This is quite a common vegan myth in certain countries with large vegetarian populations. While vegetarians don't meat, they do consume a good amount of dairy. On the other hand, vegans avoid all animal products whatsoever. You might find several vegetarians consuming honey, wearing leather or wool and drinking milk. Vegans strictly abstain from all of these products as all of them are sourced from animals. Vegans substitute milk and dairy with other milk such as soy-milk, almond milk, or coconut milk. Vegans even have nutrient-fortified dairy alternatives like tofu.

3. Vegans Lack Protein in Their Diet

This myth is frequently peddled amongst both vegans and non-vegans. Many non-vegans use this vegan myth as an excuse to not turn vegan. But contrary to popular belief, a lot of plant-based foods are packed with protein. Legumes, pulses, and whole grains are loaded with healthy proteins. Foods like peanuts, kidney beans, chickpea, and oatmeal are very rich sources of protein. Vegan diets manage a healthy intake of protein. There are several athletes and body-builders that are vegan and manage their protein intake well. An average male requires 56 grams of protein daily, while a female needs 46. Incorporating pulses and whole-grain into your diet should ensure you receive adequate protein intake.

This is not entirely true. Everyone including non-vegans could require supplements. This vegan myth has caught on a lot of steam due to meat being loaded with vitamin B12. However, plant sources have a variety of options to supply you with ample amounts of vitamin B12. Mushrooms, coconut milk, and boiled lentils are great sources of vitamin B12. Foods like oranges, lettuce, and soy milk are rich sources of folic acid. Folic acid is an essential component alongside vitamin B12 to help with new red blood cell synthesis. Not only are vegan diets rich in these two vitamins, they're also capable enough of supplying vitamin D3. You commonly find vitamin D3 in vegan foods such as rice milk, certain mushrooms, and tofu. While non-vegans might keep pointing these out, many non-vegans themselves suffer from vitamin deficiencies due to a lack of sufficient nutrition in a meat-only diet. It's wise to talk to your doctor about vitamin supplements. You should also look into taking vitamin tests such as vitamin B12 tests, Folic acid tests, and D-25 Hydroxy tests. 6. Vegans Are Anemic and Lack Minerals

Minerals are nutrients, and are commonly metal or a few other non-metal ions that aid crucial aspects of body function. Elements like calcium, iron, zinc, sodium, potassium, and magnesium are a few important minerals. While a variety of factors can lead to anemia, iron deficiency stands out as the main reason. Green leafy vegetables as well as plant tubers like beets and turnips, are rich sources of iron. Vegans get the recommended daily intake of iron squarely from safe, plant-based sources. Vegans are at the same level of risk of developing anemia as anybody else. It is important to keep monitoring your mineral levels just as much as vitamin levels. You can take a serum ferritinand iron test like this one. It would also be wise to regularly monitor your complete blood count. Contact your doctor for more information on complete blood count tests, or order a testtoday.

Green leafy vegetables such as spinach and plant milk are also very rich in calcium. Vegans also get a large quantity of calcium from fortified cereal. Calcium is also essential and performs several functions like muscle contraction and bone development. Tests like thesehelp you keep a check on your calcium levels. Another important mineral people often miss out on is zinc. From giving you the sense of taste and smell, to aiding in the breakdown of carbs, zinc is an important mineral. Vegan bodies are adapted to absorbing and storing zinc instead of regularly replenishing reserves. Vegans can obtain zinc from a variety of sources like legumes, potatoes and whole-grain. You can also get your zinc levels tested with assays like this one.

This section of vegan facts and myths looks at a rumor floated by several celebrities. Many popular vegans reverted to a meat-based diet during pregnancy to satisfy their cravings. The facts, however, state otherwise. A vegan diet is more than capable of nourishing both the mother and the fetus. A well-balanced diet that is rich in all nutrients is well suited to pregnant women. If you're pregnant you may need to take the prescribed supplements and vitamins that your doctor suggests. This is also common to non-vegan expecting mothers. However, it is important to stay in regular contact with your doctor in any case. Also make sure you get adequate amounts of vitamin D3, B12 and folic acid. 8. You Don't Need Supplements If You're Vegan

Earlier, we saw the opposite statement that was quite a popular vegan myth. Vegan circles tell us that this misinformed notion is prominent amongst vegans themselves. Dietary supplements ensure you receive regular recommended intakes of essential nutrients. This is sometimes a requirement for vegans as well as non-vegans. You should consult your doctor about nutritional supplements. You could also take a vitamin assay like this oneto help you understand your requirements.

If you're looking to lose weight, merely going vegan won't help entirely. While vegans have shown greater potential for weight loss, consuming junk food could be a dampener. You should look into plant-based weight loss diets to know more about losing weight on a vegan diet.

Veganism does however help with reducing your risks of heart disease, cancer, and stroke. Veganism is but one step that could catapult you into a healthier lifestyle.

10. Being Vegan is Pricey

This vegan myth is perhaps the most poorly framed of them all. Veganism is less expensive than both, meat-based and vegetarian diets. Veganism can help you save a lot of money that you'd spend on buying steak or chicken. Animal products on average are far more expensive than plant products. Cereals, grains, fruits, and vegetables are some of the most budget-friendly products you can buy. Veganism not only helps you get healthier, but it also helps you save the environment and money!

11. Veganism is Limited To Diet

A popular vegan myth is that vegans care only about eating plant-based food. Veganism is in fact a lifestyle. Veganism is based on the belief that no animal product must be consumed whatsoever. This is the very reason vegans avoid wool, leather, and even some types of toothpaste. Vegans are also involved in large scale environmental activism. Animal products aren't merely unethical, they also harm the environment massively. Dietary concerns encompass each diet, be it vegan or non-vegan. It is important to lead a conscious life where you're in constant touch with your healthcare provider. This helps not only in keeping your dietary preferences met, but also optimizes nutrition. Veganism is a pathway to a healthier, ethical, and more wholesome mode of life. It may not be everyone's cup of tea, however, it certainly has shown results to those who abide by it.