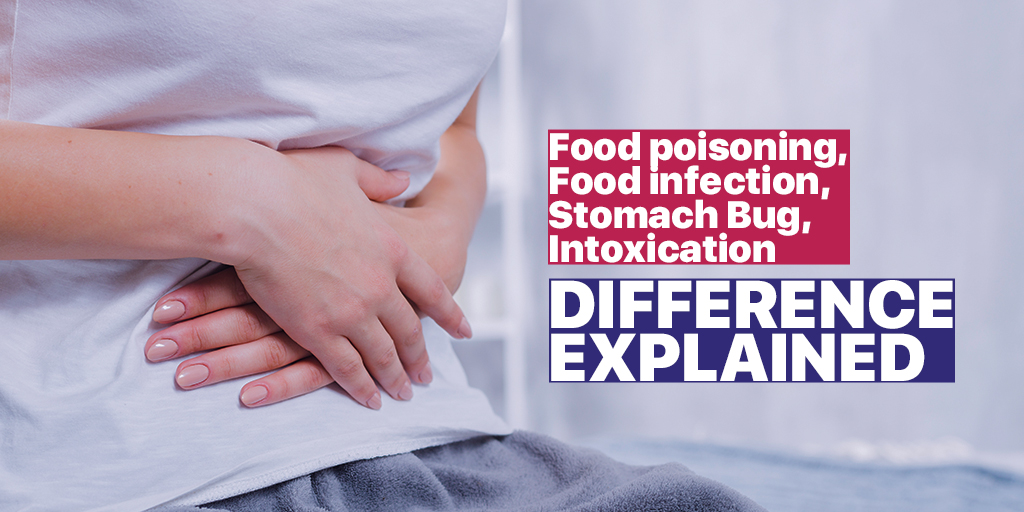 Food-borne illnesses are colloquially referred to as either food poisoning or as food infections. However, both of these terms are in contrast to the illness, the causative agent, and the source of the problem. Knowing the differences between food poisoning and food infections is essential to ensure effective management and recovery.

Food poisoning is primarily caused due to the presence of toxins in the food consumed. The food can be contaminated either by:

Certain toxins, like those produced in cases of staphylococcal food poisoning, can survive high temperatures, and can even survive in highly saline environments like salted meats. At high enough concentrations, these toxins produce a measurable effect in the body merely hours after consumption. Given their resilience in even intemperate circumstances, cooking does little to kill these toxins.

While there is a multitude of such toxins in everyday foods, the most common include Staphylococcus aureus and Clostridium Botulinum. The latter causes Botulism, a rare but acute condition that attacks the body’s nervous system, causing muscle paralysis, respiratory symptoms, and in some cases, even death. Clostridium Botulinum, a rod-shaped spore-forming bacterium is found most commonly in low-acid preserved vegetables and canned meats. The toxin produced by the bacterium is the most potent known to mankind, lethal at merely 1.3 ng/kg in the human body.

Staphylococcus aureus, on the other hand, causes the most common kind of food poisoning known today, called S. Aureus Food Poisoning, or SFP in short. While the condition is not life-threatening, it can cause diarrhea, vomiting, nausea, and stomach cramps. SFP usually does not require treatment as it usually runs its course without medical intervention. However, the responsible bacteria itself, Staphylococcus aureus, produces seven different types of mild to strong toxins that each have different effects on the infected. The bacteria and its toxins mostly occur in room-temperature foods that usually require handling – this includes sliced meats, cold sandwiches, puddings, and cold salads.

Around 50 million people suffer from food poisoning every year. Food poisoning can be mitigated by following a few common precautions: The symptoms of a food infection can depend on the intensity of the infection and the type of pathogen. Common symptoms include nausea, diarrhea, abdominal cramps, a low fever, and in worse cases, bloody stool. While the symptoms of such food infections usually disappear within 5-7 days, it is not uncommon for the infection-causing pathogens to be excreted through the stool, where the infected then becomes a ‘carrier’, causing the infection to spread to others. Given their contagiousness and long-lasting effects on one’s health, toilet hygiene is of paramount importance during a food infection.

Some common pathogens that cause food infections include E. Coli, Salmonella, and Campylobacter. However, viruses, such as Hepatitis A and the Norwalk virus group, can also cause viral food infections. While food infections are usually mild, they can cause severe symptoms in the elderly and children. Much like food poisoning, food infections can also be avoided with a few general rule-of-thumb precautions:

Food Poisoning/Intoxication vs. the Stomach Bug

Viral gastroenteritis can cause a range of symptoms, including weight loss, fatigue, diarrhea, cramps, nausea and vomiting, joint and muscle aches, headache, and general malaise. Symptoms are usually noticeable within 24 to 72 hours from the time of infection, and they persist for up to 10 days. Much like food intoxication, stomach flu usually resolves itself without medical intervention, provided that the infected stays hydrated and takes ample rest. If the symptoms persist, it’s best to get in touch with your family physician to discuss the right treatment plan to recover from the infection.

Norovirus causes 21 million annual cases of stomach flu in the US. Viral gastroenteritis is as prevalent as it is contagious, especially when caused by rotavirus or norovirus. Apart from direct contact, stomach flu is also spread through the infected person’s stool, saliva, or vomit. The stomach flu is also seasonal and is most common between October and April. When treating the stomach flu, hydration is the foremost priority. Since one of the symptoms of stomach flu is dehydration (which has its own set of complications), staying well-hydrated during the infection is important to prevent the loss of important electrolytes. Including other beverages in your daily routine, such as energy drinks (Gatorades) can prove beneficial in restoring the natural hydration balance of the body. A few other tips to help treat the stomach bug are:

Food poisoning usually heals on its own in mild cases. However, if you have severe symptoms, such as blood in your stool, diarrhea for over 3 days or longer, high fever, or dehydration, it is best to visit your physician to receive the most accurate medical advice. Take ample rest and OTC medication for a fever. In severe cases, you may also be sent to a hospital for intravenous fluid hydration, and your physician may prescribe you an antibiotic.